All it Takes is One Mind

I posted this on Facebook a few days ago, but I really wanted it to be my first blog post.

Einstein formulated the general theory of relativity in 1916. It made predictions that he didn’t live to witness proven:

Just a few days ago, he did it again. He proved that the Earth (or any other massive body) affects space-time not only by its presence, but by frame dragging, which is to say by spin. This is key to understanding the most violent catastrophes in astrophysics and the origin of inertia itself. A simple way to visualize this is imagine the Earth is in a vat of honey, as the Earth spins, layers of honey closest to the rotating mass will be dragged, and the further layers are dragged less. This is not unlike the magnetic forces that cause adhesion and cohesion in honey itself – just imagine the implication – gravity behaves in some ways like magnetism.

Theories follow experiment. This is central to the theory of induction. When we see A followed by B happen enough times, we say that the more it happens the more likely they are related, until we reach near certainty. The sun rises every day, therefore we expect the sun to rise again tomorrow. This led, of course, to the discovery of many phenomena such as the Earth’s orbit around the sun. One of the big questions in philosophy is whether our brains synthesize knowledge, or whether all knowledge is given and all we ever do is put old pieces of knowledge into a newer, shinier piece of knowledge.

So imagine experiment to be a man trekking up a hill, and he breaks loose a stone, and the man behind him picks up the stone and examines it. This man is called Theory and “Law”. We then come up with Laws, but then they’re supplanted when we can find a more elegant or complete one.

What Einstein has done is something incredible: a century after he made a prediction based entirely on the synthesis of his mind, he has continued to be absolutely right about what he expected to happen. The man following the trekker knows what the next stone to break loose looks like. This individual made predictions in an age of little technological achievement in terms of spaceflight, and it took us nearly a century to build instruments to realize that he was right. He made some observations on Earth and accurately made extrapolations that apply in the largest scales imaginable. His genius has rocked physics, and will continue to do so.

One of the challenges that’s a quagmire in theory is reconciling quantum physics and general relativity. In the large-scale, quantum physics can’t explain gravity (the team at LHC is currently working very hard in trying to figure out what gives particles mass, let alone the property of gravitational force). In the small-scale, relativity can’t make any predictions, and it breaks down in trying to explain things such as quantum tunneling and the energy levels of an electron as it absorbs or emits electromagnetic waves. String theory is a promising theory that could reconcile both, but there’s just a few problems with it. First, there’s like 7 different theories, none of it has ever been observed in a laboratory, and it’s the most complex thing you’ve ever laid eyes upon. Einstein, however, did it all in his scruffy looking head.

As an adult it’s easy to lose that sense of wonder and mystery that surrounded us when we were children. We don’t give a shit whether we can see the nucleus of the Milky Way in a dark summer’s night. We don’t care that we’re raping the only place we will ever call home. We act foolishly towards our brothers, sisters, and friends. When we hold our phones, we don’t think of the billions of instructions per second happening within a millionth of a meter, communicating with satellites in orbit and with antennas miles away, downloading the entire contents of a book in seconds. But every once in a while something shows up to remind us of how little we know, and how just an instant of curiosity can unlock the next secret that the universe holds. 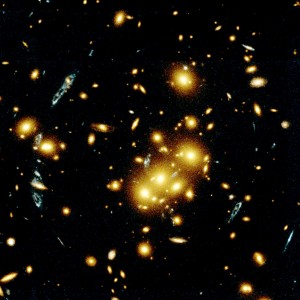 Gravitational lensing is the General Theory of Relativity’s proof that mass bends space-time, therefore bending the travel of light. Notice how the same galaxy is lensed into several versions of itself due to a mass in the center of the frame. You can see the galaxy tinged with a blue ring, at 4, 8, and 10 o’clock positions. See: [imagine.gsfc.nasa.gov].