Today, I shall talk about one of the most interesting aspects of thermodynamic law: the concept of entropy.

Entropy is simply a measure of the energy in a system that is not available to perform useful work. It is the reason why machines are not considered completely efficient. For example, entropy in your body is all the heat that you generate and is not used for bodily processes. In a cold day, the entropy is lower, because some of that heat generated is good for keeping you warm.

Another important (if not loose) use of entropy is to describe it as the amount of disorder in a system. Systems that start out organized will become more disorganized over time, but disorganized systems do not become organized unless energy is applied to them.

As defined by the second law of thermodynamics, entropy in an isolated system remains constant or increases, but it never decreases. To show this point, I shall point out some real-world examples of entropy at play.

The Disorder that Surrounds Us

Consider a billiards table. The balls are all racked into a triangle shape, and let’s say that all the numbers are facing up and readable from one end of the table. We could say that this billiards table has the minimum amount of entropy. Since no one has played the cue ball, entropy remains the same, the balls won’t move on their own. We can then apply energy to the system, because no system is truly 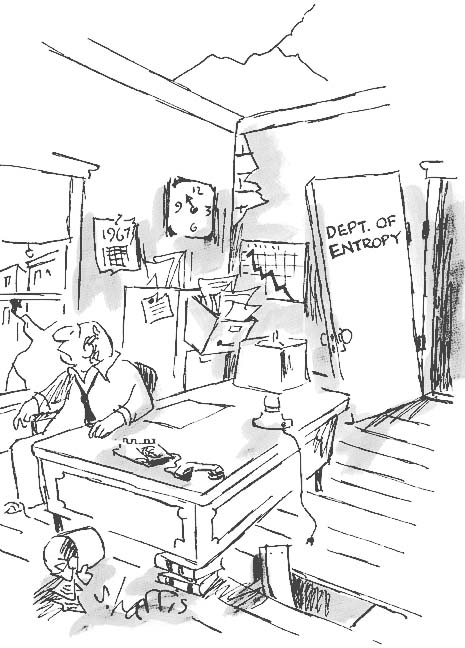 isolated, and the cue ball hits the racked balls and they all start flying into different parts of the table. The level of disorder is increasing, therefore so is the entropy. The further along the game goes, the more disordered the table is, until it can’t be in any more disarray. The only way to bring order back to the table is to re-rack the balls (by applying external energy), or by putting the balls into one of the 6 pockets (also by applying external energy). There is NO way that hitting the cue ball will end up putting all the balls into a triangle with the letters facing up and north.

Another good example is holding a ceramic coffee mug – its ordered state makes it look like a nice coffee mug. I almost won a Socrates coffee mug in a philosophy contest, but some better philosopher took it from me. If we were to drop the mug onto the ground, it would shatter into many pieces, if we dropped those pieces again, it would shatter further, until it couldn’t shatter any more. You will never drop those shattered pieces and end up with a perfectly crafted coffee mug with Socrates’ mug drawn upon it.

For you gearheads, consider what happens at the brake disc in your car. When you brake your car, you dissipate the car’s forward momentum and the angular momentum in the wheels into heat at the brake pads and discs. This energy cannot be used to create any more work, it will be dissipated into the atmosphere, and will have heated up the planet’s air by the tiniest of amounts. Guess how some Hybrid cars work to regenerate some battery charge – by trying to recover highly entropic systems! Some (if not all) hybrid vehicles have regenerative devices in their brakes, using magnets and the such to generate some electricity, and in turn the electricity generated creates a magnetic field that counteracts the spinning magnet (See Lenz’s Law).

The Arrow of Time

There is a direction that entropy takes, and it is called the entropy arrow of time. Systems always go from ordered to disordered or will remain constant, without exception. More formally stated, entropy in an isolated system never decreases with time.

Entropy is the only physical quantity that requires a particular direction in time. You, for example, could go to the mall or to church at any given time, but regardless of where you go you’ll be about an hour or two closer to death. Just like thermal energy is always transferred from hot to cold, isolated systems as a whole never decrease in entropy.

The Largest System of All

We talked about the billiards, we can consider the pool table the closed system, and it’ll continue in disorder until we apply external energy to reorder it. If you think about it, you just made yourself part of an even larger closed system, and the entropy of the human&billiards sytem is going up – you burn calories to exert energy in reordering the balls. You can make up the energy by eating a delicious orange, and now you’ve disordered your kitchen, etcetera. We can keep increasing the scope of this system, until we reach an inevitable limit: everything that has ever existed. 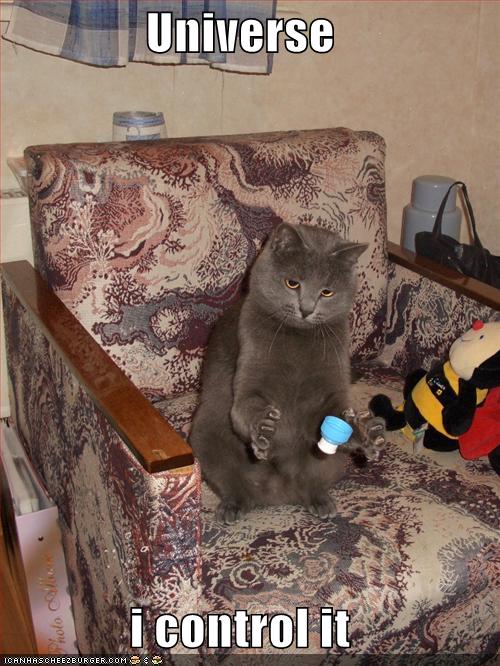 The known universe is believed to be a closed system. This means that the total entropy of this system is constantly rising, and it has been a matter of speculation that we will be subject to a “heat death” in which all the energy in the universe will be distributed, and no work can be extracted from any source because it’s all just a big soup.

Since gravity ties every piece of mass in the universe together, and black holes are considered to be the maximum entropy objects for their size (I would imagine that the mass of 1,000 suns fitting into something much smaller than the head of a needle would be), then all matter will eventually end up at the core of a star that collapses into such a singularity.

Of course this is all speculation, so our demise may be at the Gates of Heaven. Let’s hope it’s the latter.

Entropy is a relatively simple concept, tied to one of the laws of thermodynamics, that tells us not what the world will look like 5 minutes from now, but definitely knows what it *won’t* look like. We are all subject to it, and now you know what it is.

Let us take a second and consider what the ramifications of constantly increasing energy dissipation and disorder mean to us: the universe must have started at a maximum level of order, at a single point in space and time where everything blew apart and created every particle that’s ever been in existence. Fast forward some billions of years, and a star supernovas and creates a bunch of space junk that includes everything we’ve ever been made of. We are made of the bowels of a super-hot fusion reactor in a star that couldn’t maintain its monstrous size. We are, as Carl Sagan once said, made out of star stuff. We are the product of catastrophe and disorder. The molecules in your skin, made out of organic matter, were manufactured in a million degree furnace many billions of years ago. The calcium in the strand of hair on a Chinese man’s scalp may have been right up against the oxygen atom that’s in your lungs right now, cozied up right by a piece of iron that’s deep in the heart of Jupiter’s volcanic moon Io.

If that’s not a disorder that brings us together, I don’t know what is.