A Star is Born

We see them twinkle at night, we make odd shapes out of them, and one of them is a major component of our daily lives as members of a race and components of a complex ecosystem. But what is it, and how did it come to be?

When we look into space at night, we see little dots of light, and nothing else. It looks empty, but in fact it is not empty: space is full of gas and dust. This is what’s called the Interstellar Medium (ISM for short from here on out, so remember!)

The majority of this ISM is Hydrogen, which happens to be the most common element in nature. The rest is dust, but not the dust you’re used to, more like carbon, silicon, and its compounds such as CO, HCN, etcetera.

The ISM is not spread throughout space evenly, it has clumped in some regions and is extremely sparse in others. In the same fashion, some portions of the ISM are hot, and some are cooler. Let’s then consider that the ISM has two important qualities: density and temperature. (Note: since the ISM is mostly hydrogen, then the density of the ISM can be considered to be the amount of hydrogen atoms in a cubic meter).

This medium has an extremely wide range of densities and temperatures: there can be as little as 100 particles of ISM in a cubic meter, to about 1017. Same with temperature, it can be as low as 10K (that’s almost absolute zero, way below freezing) and as high as a few million K (the temperature inside a burning star, hundreds of thousands times hotter than our sun’s surface which is about 5000K).

Nebulae are clouds of ISM that are dense enough and lit enough to be observed via infrared, x-ray, and visible light. There’s several kinds: 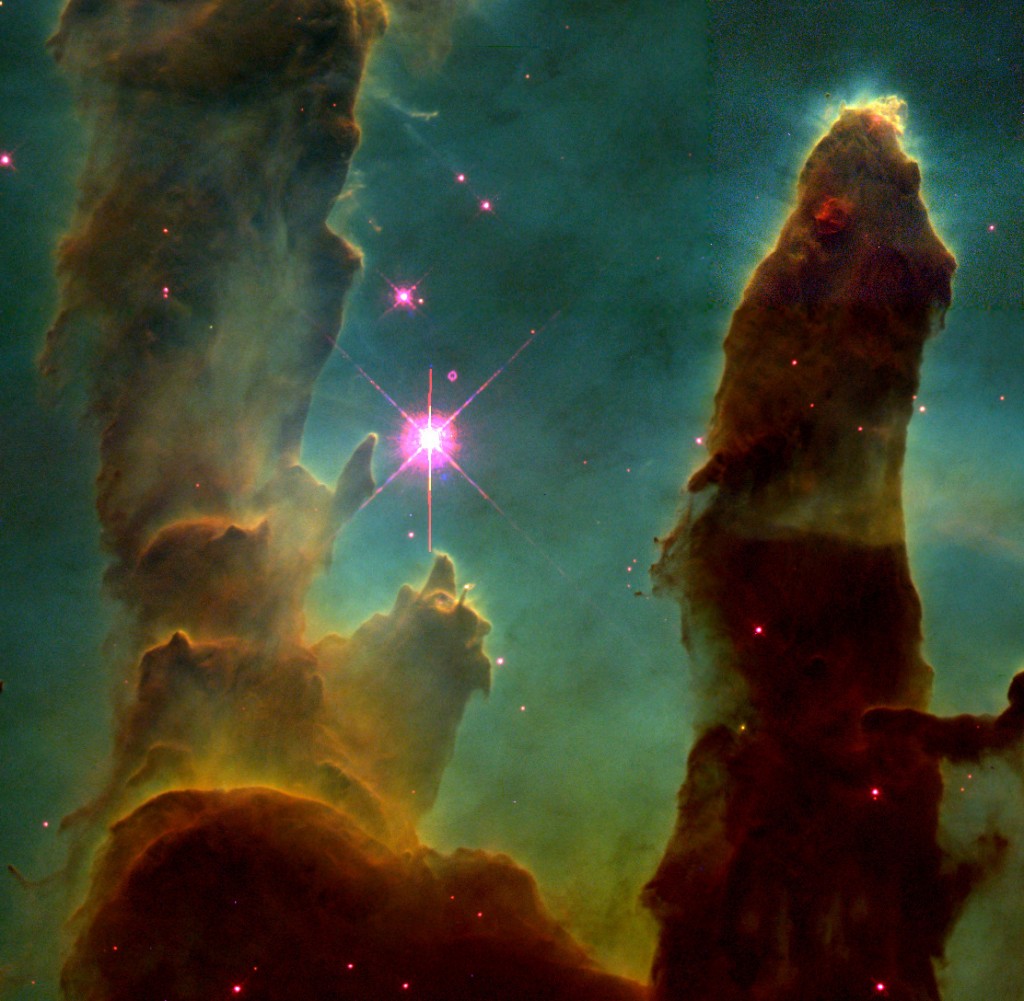 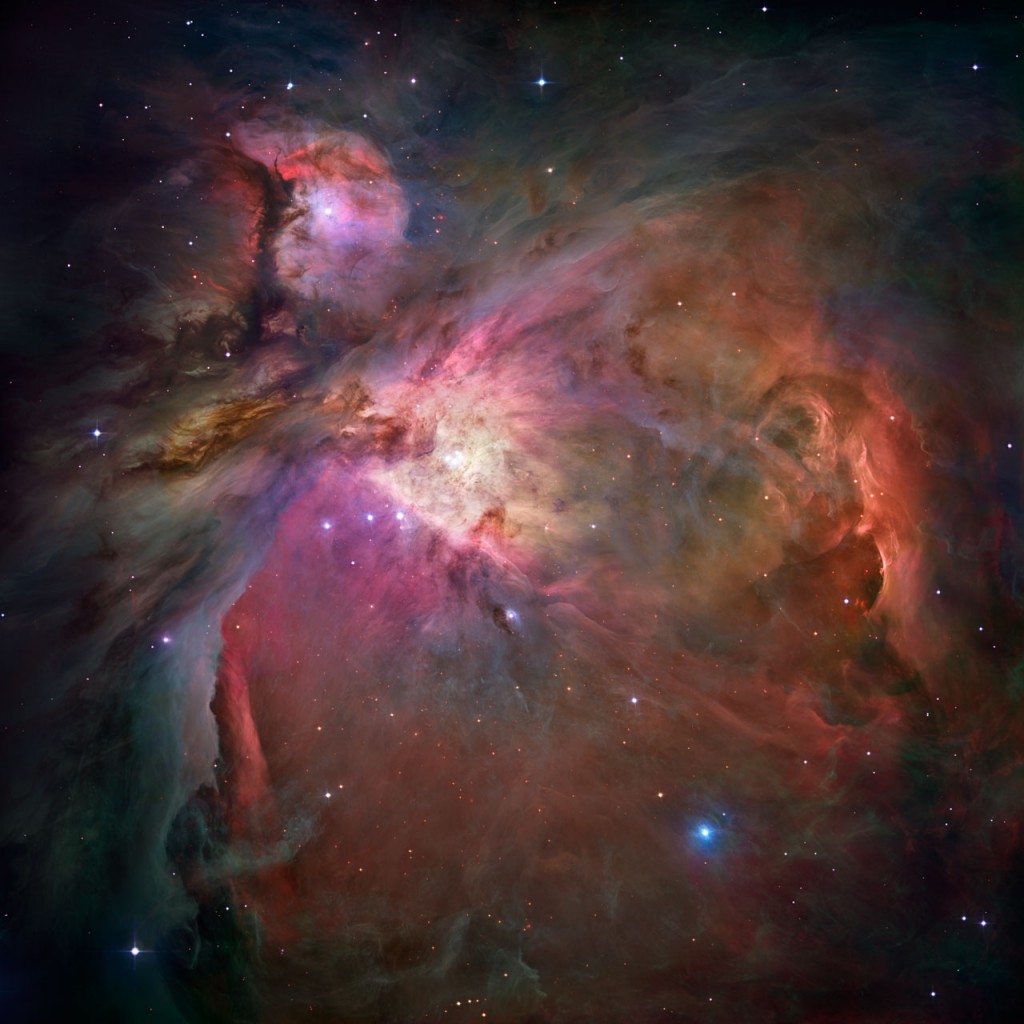 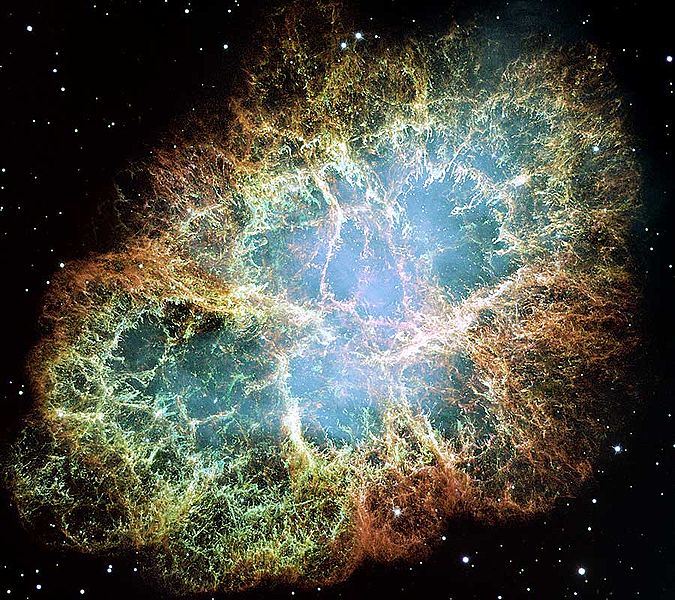 So space is filled with gas and dust, and higher concentrations of these in the vicinity of stars will shine (or block) light to give rise to nebulae. The areas that give rise to star formation are called Molecular Clouds. They are HUGE and contain ridiculous amounts of Hydrogen, their mass can sometimes be that of millions of solar masses, and diameters of 40 to 400 light years. That’s a lot of gas in a lot of space, so if that particular gas density was bottled in front of you you would still not be able to see it: it’s only about 200 to 300 hydrogen molecules per cubic centimeter – it is a trillion trillion times less dense than the air we breathe. 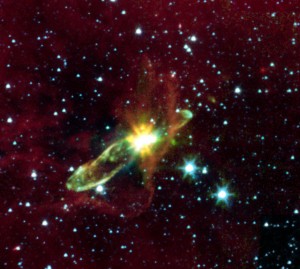 A protostar is not visible in the visible spectrum, so devices like the Spitzer Infrared Telescope can unlock some of their mysteries. This picture is drawn in false color since these wavelengths are invisible to the human eye.

In an ISM (remember? dust and gas?), where the temperature is low, and the density is high, gravity starts pulling all that hydrogen and dust together. The only place that this can happen is in the dark nebula. The other kinds of nebula are too hot: the temperature will overcome gravity and they will just dissipate and be pretty to look at. In the dark nebula, gravity can dominate, and the star can begin to form.

As the dust and gas comes together, its density and temperature will increase into something called Barnard Objects, and this blob will continue to heat up and compress. As the cloud becomes more opaque (less transparent), radiation will have a hard time escaping, and will be contained in the blog causing a spike in temperature and pressure.

The seed of the star is born – the protostar.

The Birth of a Star

Not all big, cold, dense clouds collapse under gravity to become stars. Remember there’s two effects acting against each other: gravity, the force that brings two massive objects together, is fighting thermal energy, which wants to drive molecules apart. A star is born only when gravity wins, and the core has reached about 10 million K. When the core of the protostar is this hot, assisted with the unholy amounts of pressure, hydrogen molecules can start meshing together in a process called fusion. As soon as this happens the gravitational collapse of the star will stop. Our star has become a hydrogen-burning main-sequence star. And this is why we call stars “fusion reactors”, because in essence, they fuse hydrogen molecules, and therefore release vast amounts of energy through the proton-proton chain.

Remember that all of this was happening inside a dark nebula, so a star that’s being born is not visible to the naked eye. It can only be detected in the infrared and x-ray wavelengths, therefore special telescopes have to be used (such as the Chandra Space Telescope). After the star is born, it’ll blow away its shroud and will become visible. This cloud, after it’s blown away, will go on to become a reflection or emission nebula. These are often referred to as star nurseries, and the Orion and Horsehead Nebula are two good examples.

My Favorite Part – The Big Picture

As if the picture weren’t big enough.

Hydrogen is the most common element in all of the universe. In some places it’s more dense than others, even though of extremely low density. Combined with little pieces of molecular dust, it clumps up into large clouds of material that starts coagulating, and via the gravitational force and assisted with low temperatures, a seed is born. This seed will continue to gather mass and further compress, becoming hotter, until one day it’s hot enough to start a fusion reaction. The immense loss of mass and emission of energy from the new star will blow away its motherly shell and will become one more of the trillions upon trillions of stars existing in the universe.

This is where we were born. In the core of one of these fusion reactors. We all started as itty-bitty pieces of hydrogen and carbon and nitrogen dust, compressed into existence, ejected catastrophically from a runaway explosion, thrown away in space, and captured in the gravity well of our star the Sun.

So here we are.