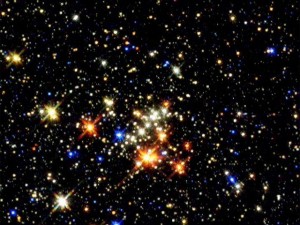 Stars come in many different colors and sizes!

A few days ago, we talked briefly about how stars are made. But no two stars are identical: they can vary in size, internal pressure, temperature, composition, age, mass, mass loss, density, spectra, brightness, and luminosity. Today we’ll talk about some of their visual characteristics. Tomorrow, we’ll talk about their types, and how these two are related.

The color of a star is determined by its surface temperature. Kinda like the flame you see on occasion, we know that the red flame is the lamest, followed by the yellow flame, so on until the blue flame which is the hottest. Same with stars, except many times hotter. Different than a flame, however, is that colder stars can emit in the infrared (and therefore invisible to the human eye), and really hot stars emit mostly in the ultraviolet (which is equally invisible). 70% of the stars in our galaxy are in the infrared, which is why we have infrared telescopes, and they must doctor their images to false color so you and I can marvel at their artificially natural beauty.

A star actually emits at many wavelengths, for example, our sun emits across the visible spectrum but we all know that it also emits UV (which is why we wear lotion in the beach) and the infrared. The hotter the star, the more it emits in general, with a peak at a certain wavelength. Observe the following charts,the colored bars represent visible spectra.

Stars emit their peak energy at different wavelengths depending on their surface temperature (shown in the Kelvin scale). The hotter the star is, the bigger the area under the curve (therefore putting out more energy in its photons) and the peak energy shifts to the left towards the ultraviolet. Lower energy stars emit less energy, and peak towards the right.

Our sun is a bit like the chart in the middle, it puts out light at all frequencies in the visible range at about the same rate, with a slight peak in yellow, which is why it’s kind of yellow.

Some stars are SO HOT at the surface that they put out nothing more than x-ray radiation. They are so dense that all they’re made out of are neutrons, with the mass of several suns compressed into the area of a small city. If you held a chunk of this in your hand (assuming you could) and you let it drop, it would crash through the ground, shattering rock and iron until it cut its way into the center of the Earth, overshoot it, come back, overshoot again, until being assimilated into our iron core. How will I ever explain this to the insurance agency?

Wien’s law states that the peak wavelength is inversely proportional to temperature, and it gives us a number in nanometers.

There You Have It

So this is why stars look different colors: they are different temperatures. Using some back-of-the-envelope math, we can figure out the surface temperature and emission spectra of stars. It’s very reliable too – so when things don’t match up, we can ask followup questions to the nature of these fusion behemoths. Tomorrow we’ll put more of this together and dive deeper into the mystery of our stellar ancestors.