Anti-Matter! Stuff from legend, science fiction, both good and terrible books in the strange section at Barnes and Noble, is it real? What’s it like? Why is it so hard to find? And why is it so uncommon?

These questions, and more, summarily answered by science’s hive mind. I’m only but one small remora sucking from the side of the massive whale of knowledge.

What’s it Made Of?

Anti-matter (and anti-particles, but from now on I’ll just refer to them as the former) behave in exactly the same way as their opposite particles. If a baseball was made of anti-leather, anti-hide, and anti-rubber (or whatever baseballs are made out of), it would fly just the same as a regular baseball, it would look the same, it would weigh the same. It would be near impossible to detect what kind of particle it’s made of. In fact, we could even say we’re made of anti-matter, and that regular matter is very hard to detect.

How Do We Even Know it Exists?

We’ve observed it, and very recently (at the CERN particle accelerator in Switzerland) we were able to create many anti-Hydrogen atoms and held them in place for about 17 minutes (nature.com). This is a lot longer than previously achieved in other experiments, and now we can do some really good science on these observations.

The anti-particles eventually escape their lock-down and annihilate with particles around them, giving us otherwise-unexplainable flashes of light. So here we are: we have Hydrogen locked in a chamber, and it looks like regular Hydrogen, and behaves the same way, weighs the same, but then it disappears in a flash of light. It ain’t magic.

So How Do We Know it’s Anti-Matter?

Matter and anti-matter annihilate when they come in contact. Annihilation is the conversion of these particles into gamma (high energy light) and other particle-antiparticle pairs. To know that a anti-matter makes up a baseball, we’d have to throw it into something made of matter and see if it blows up in a fantastic flash of light. Chances are your hand is made of matter too, so even holding it would bring some unfortunate (but awesome) consequences. 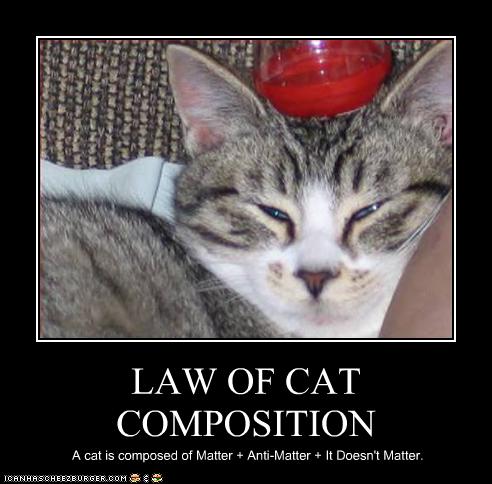 How Do We Know the Earth is Made out of Regular Matter?

If there was anti-matter in the Earth, it’d be annihilating with the surrounding regular stuff, and we’d be able to detect it. But so far nothing has really been observed, with one exception: it was just recently discovered that anti-matter thunderstorms create anti-matter above them (bbc.co.uk).

So If it’s So Similar, Then Equal Amounts Were Created in the Big Bang!

Not quite so, it seems. Anti-matter is a lot less prevalent in the observable Universe as matter is. Why? No one knows for sure (actually, do we *really* ever know *anything* for sure?)

Baryogenesis is the process by which there’s a population difference between the two kinds of particles. Baryons are the names of the elementary particles that created everything we know after the Big Bang, so the question is, why were there more Baryons than anti-Baryons? Hint: the most popular Baryons are protons and neutrons.

You HAVE to Have Some Practicality to This.

And there is – anti-matter is used in the medical field for PET imaging, and recently it’s been found effective in the treatment of some cancers (engr.psu.edu).

The Universe continues to marvel us, the deeper we look, the more we realize that we have no idea about where we come from and where we could end up, and the things that we could achieve. When you hold something in your hand, you’re not holding just a coffee mug full of hot liquid, but a microcosm of particles that were created and survived many billions of years ago. It’s a bit much to think about, at times overwhelming, but it’s important to have the presence of mind to realize that we’re just a thread in a massive weave of existence.