Sound and light are waves. The pitch of the sound and the color of light are a result of the frequency of these waves, that is to say, how many times the wave “peaks” in one second. This is otherwise known as “Hertz” – the musical note “A” is 440Hz, therefore it peaks 440 times in one second.

Visible light corresponds to electromagnetic waves between 400 and 790 THz, that’s Terahertz, or trillions of times per second. But there’s another way to look at it, the higher the frequency, the shorter the distance between the wave peaks. That’s what is referred to as wavelength.

The wavelength for visible light is 390nm to 750nm (that’s nanometers, or a billionth of a meter). The small wavelength corresponds to the highest frequency, because the shorter the distance between peaks, the more times it “peaks per second”.

Visible light colors by wavelength, in billionths of a meter.

Distilling the above diagram to break down the waves into what they individually (sort of) look like,

So there’s an inverse relationship between frequency and wavelength, and it is expressed by a very simple equation:

Where f = frequency, c = speed of light (300 million meters per second), and the funny squiggly line (lambda) is wavelength. For example, if lambda was 1 meter, frequency would be large (300000000/1, which equals 300000000 Hertz, the frequency VHF TV signals). If we increase the wavelength, to say, 100 million meters, then the frequency would be very small (300000000/100000000, which equals 3 Hertz, the frequency of ELF waves). So when one goes up, the other goes down. This is why algebra is important, people, a lot of the theory is accessible to you with only a basic understanding in mathematics.

We are assuming, however, that the source of these waves is static. But everything is moving. What happens if something is approaching you, or if something’s getting further away? What happens is the Doppler Effect.

This is readily apparent when a police siren zooms by you, as it approaches, the sound has a higher pitch, but when it passes you, the pitch seems to drop to a “lower note”. The wavefront has passed you and now the waves are “stretched out”.

Well, it just so happens, light behaves the exact same way!! Since red is a lower frequency than blue, when objects race away from us they turn just a tinier bit red (because the frequency is lower on the back end), and objects coming close to us turn a tiny bit more blue!

You may be asking yourself: “to know that something is a tiny bit more red,  you’d have to know its original color. This stuff is remarkably far away from us. who do you think you are, you loon??”

I actually have an answer for you. Every element gives off a signature color band. Just like gold is always yellow, Hydrogen and other common space elements have a signature “light spectrum”, and if this signature shifts all the way to the red a little bit, we know how fast this Hydrogen (or whatever it is) molecule is getting away from us. Here’s a great graphic I found on a certain open-source collaboration wiki that’s very popular in the internet and teachers absolutely hate: 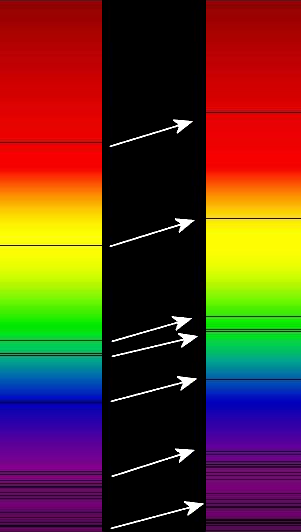 Redshift of spectral lines (the little black bands) in the optical spectrum of a bunch of galaxies (right) as opposed to our own sun, which we know ain't going nowhere (left). Notice how the galaxies on the right have spectral bands that have moved up towards the red.

ALAS we come to the point of the blog post: everything in the observable universe IS SHIFTED TOWARDS RED. Only ONE THINGS could explain this: THE UNIVERSE IS EXPANDING EVERYWHERE.

I’m  going to blow your mind one  more time: the bigger the “redshift”, the faster the object is getting away from us. It just so happens that the further away something is, the bigger the redshift, which means that farther objects are going faster than closer ones. THE UNIVERSE SEEMS TO BE EXPANDING EVERYWHERE AND ACCELERATING TOWARDS THE EDGES. This is described by Hubble’s Law using Hubble’s Constant. We can look at an object, know how fast it’s going, and therefore know how far away it is.

We have just taken a look at the sun, then we look at a distant star, and just from their colors we can discern whether it’s getting away from us or coming towards us. When we look pretty much anywhere, the same thing is happening. We even realized that the universe is ballooning at an exponential rate, and we can use this to infer distances in the range of millions of freaking light years.

Humans may be tiny and meaningless specks of dust living on a slightly bigger speck of dust in the middle of a bright speck of dust amongst a cluster of beautifully colored specks of dust. Yet we have managed to unlock some of the biggest mysteries just by looking at old light from minutes after the Big Bang occurred. Avoiding an anthropocentric ego-trip, there’s something special about us, but it’s not necessarily in the way we handle our business and treat ourselves, but in how sometimes we achieve what seemed to be once impossible.