Nebulae – Clouds Alight in a Deep Ocean of Darkness

We took a brief look at nebulae, but some of you fed back to me that we didn’t take far enough of a look. A nebula, as explained a few days ago, is a big mass of gas and dust that either reflects or fluoresces light. They are a showcase for the stars that inhabit and surround them, much like a beautiful personality makes a stunning woman even more brilliant.

In this post, we shall look at some of the most beautiful nebulae ever witnessed, both from the ground and from our in-orbit superstar, the Hubble Space Telescope.

There’s many other amazing things to witness through the telescope eyepiece, like the Magellanic cloud and the star cluster, but those shall have to wait.

The Eagle Nebula is part of a diffuse emission nebula, if you recall from a few days ago, emission nebula shine because a nearby star ionizes the gas and excites its electrons, and when they de-excite they give off light via fluorescence. The most famous portion of this nebula is called “The Pillars of Creation” because gas-forming dust is part of the tips of these pillars, and if you also recall, these are small chunks of dark nebula where the protostars form. 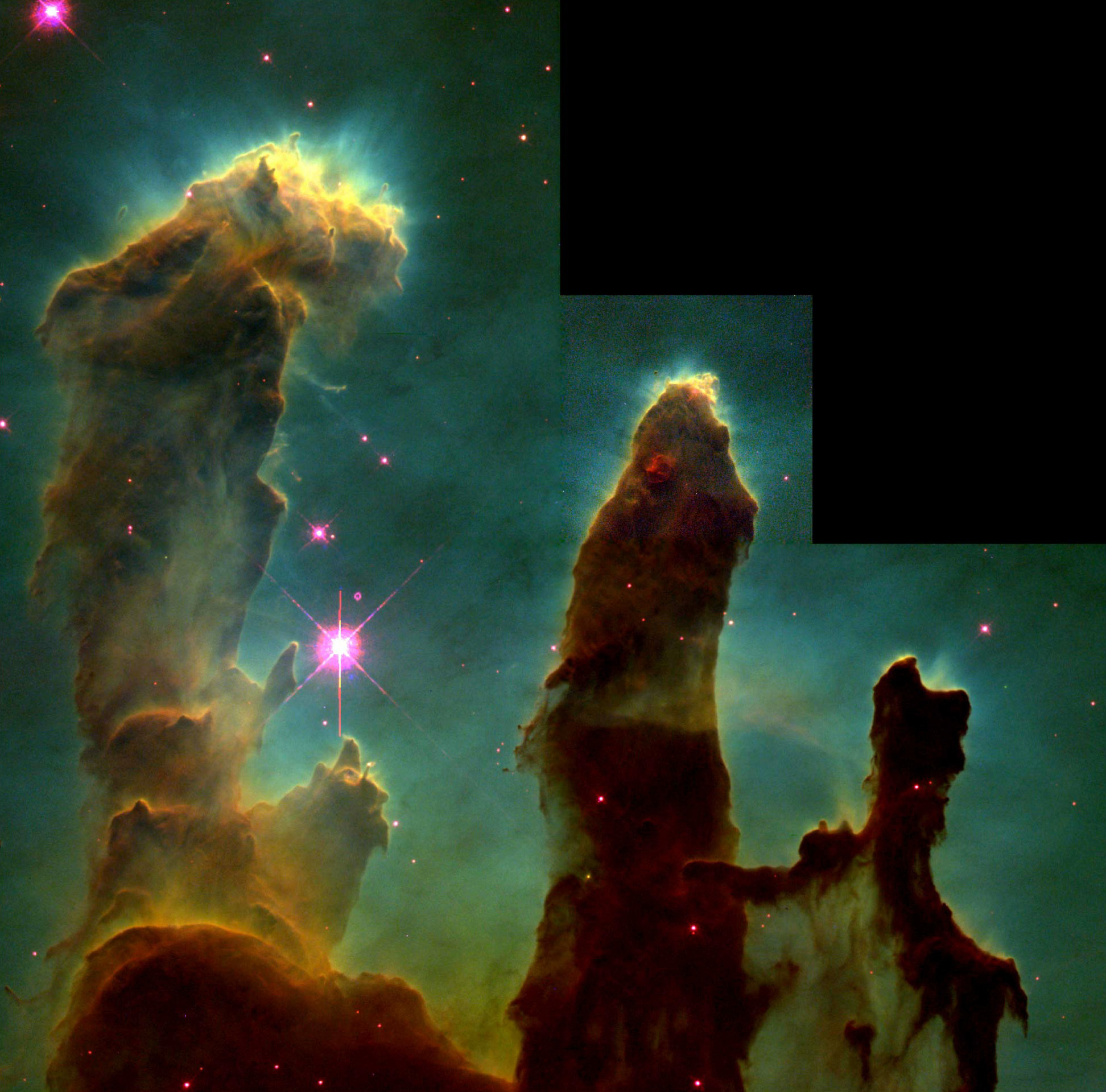 The Pillars of Creation

Another emission nebula where the gas is ionized by a cluster of stars in its midst. This nebula is a region inside the Traingulum Galaxy, and it exists 2.7 million light years away. That is, by any measure, extremely far away. It is so bright that if it were equally far away from us as the Orion Nebula it would outshine Venus, the brightest object in the sky after the sun and moon. What a sight to behold: 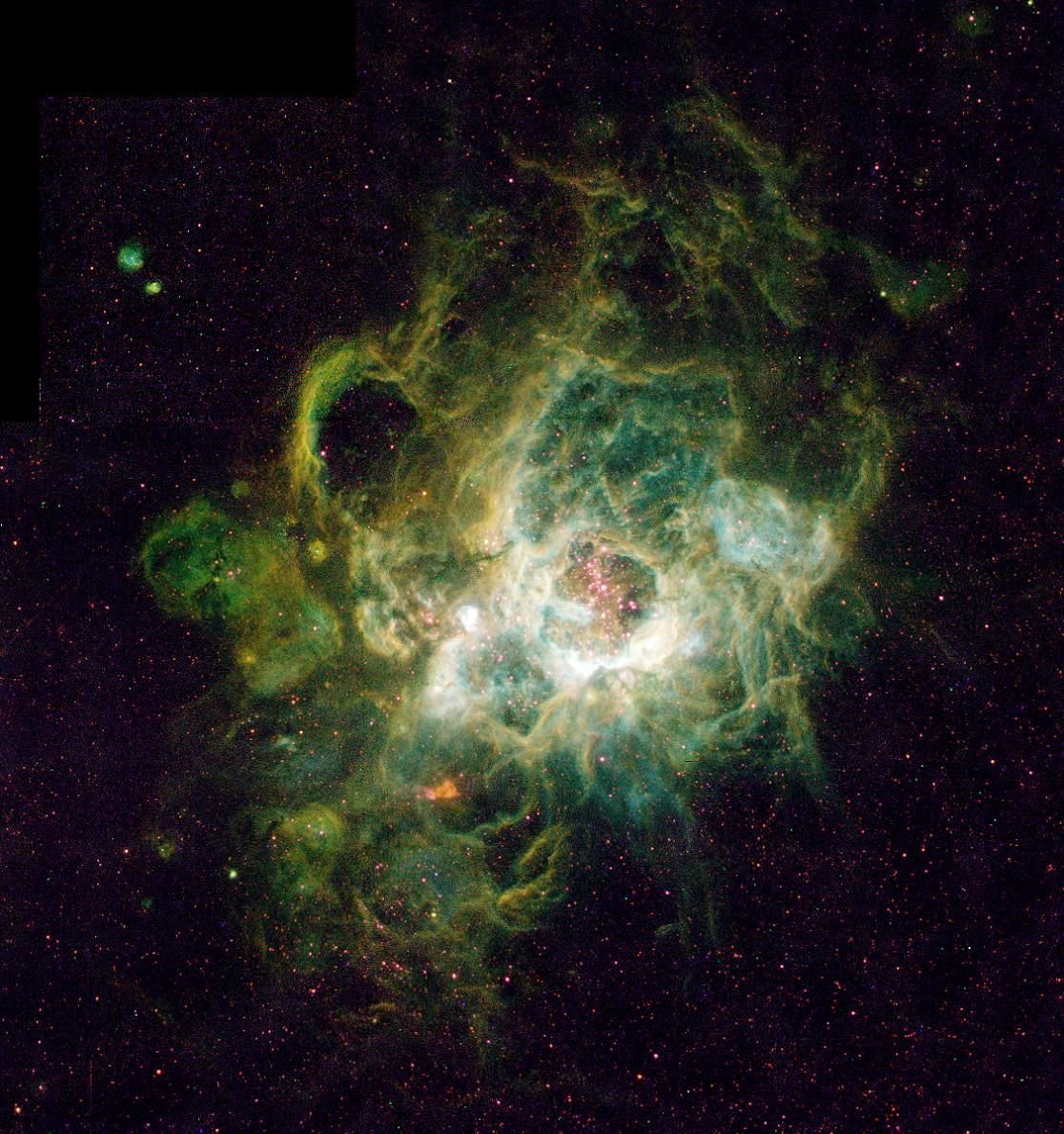 The Crab Nebula is a supernova remnant that has a strong pulsar in the center – a rapidly spinning neutron star that acts very much like an x-ray lighthouse (specifically, this one spins about 30 times per second, about as much as an old phono record, and measures about 30km across, about as much as a a small city). After a star is destroyed in a cataclysmic explosion, the new elements that are manufactured from the explosion are blown away further in pulsar winds and are ionized by this high energy flux. 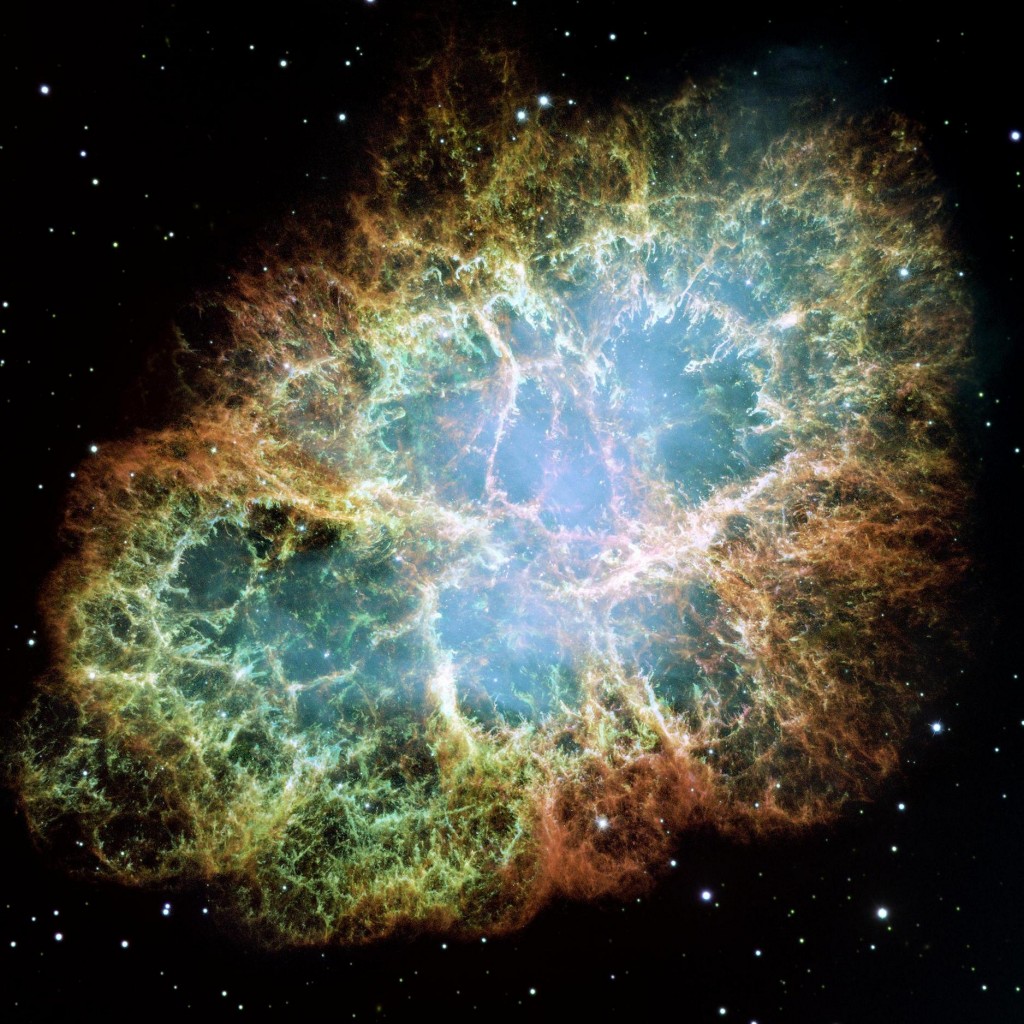 The spinning star in the center requires some special attention, because it is so freaking cool. How can something so large and so dense spin so fast? Imagine a mass of several suns, in the area of a small city, spinning 30 times per second. Its magnetic pole is putting out the x-ray and gamma radiation, which is the source of its lighthouse beam. Remember Emily Noether and her conservation of angular momentum? Surely you’ve sat in a chair, with arms and legs stretched out, and started spinning slowly. As soon as you contract your extremities your spin becomes much faster. This is conservation of angular momentum – this star went from being very large to very small, and has essentially sped itself up by shrinking millions upon millions of times in size. Here is a picture of this monstrous beauty: 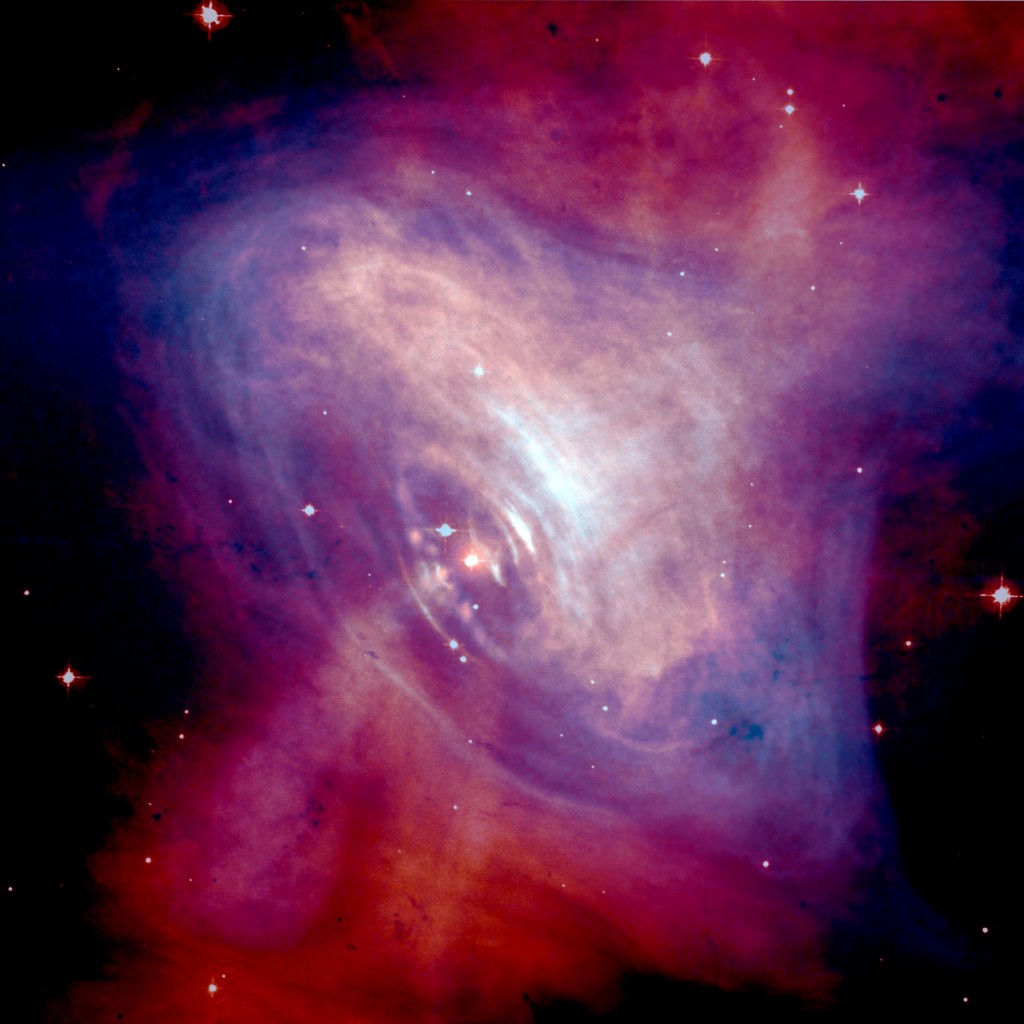 You can see the direction it sweeps in, the gas ionized in a disc by the super intense x-ray and radio radiation being emitted from the pulsar. It’s a good thing we can look at it from this far away: the radiation created from this pulsar would wipe all life from our planet in the  blink of an eye.

This is the sort of thing that’s left over after all the atoms in our body were created.

Another emission nebula, this time in everyone’s favorite constellation Orion. It is lit by the easternmost star in the belt, that is to say, if you’re looking at the belt and Betelgeuse (the red supergiant) is on top, and Rigel (the superhot blue) is on the bottom, it’s the leftmost of the belt.

The dark strands in the middle are dark nebula, that tenuous place where the building blocks of life are put together for the first time. 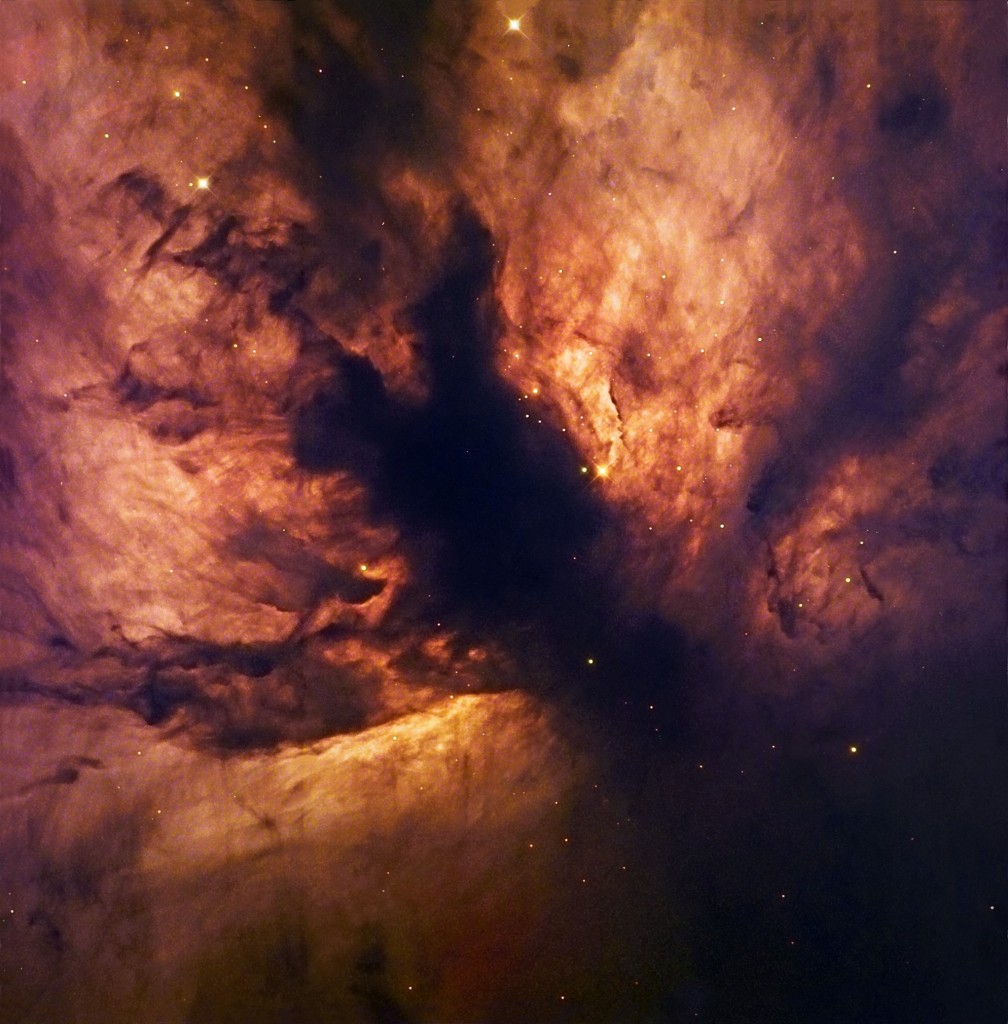 The Cat’s Eye Nebula, pictured first, is actually a planetary nebula: a star lost its envelope via a process called mass loss. The star runs out of hydrogen to burn, so it stars fusing other materials, then it switches back, and these thermal pulses shoot out in intervals. The star essentially ejects its outer shells and atmosphere into some of the most complex celestial constructs ever witnessed by our species.

In the second picture, the concentric circles from this thermal shock are processed to make them more obvious. It’s important to remember that not all of these pictures are what you would see if you peered at the nebula, sometimes exposures are hours long to gather as much light as possible, and sometimes invisible colors are recolored to show structure.

Discovered in the 18th century, these cosmic butterflies were named for their resemblance to gas-giant planets. Planetary nebulae are actually the remains of stars that once looked a lot like our sun. When sun-like stars die, they puff out their outer gaseous layers. These layers are heated by the hot core of the dead star, called a white dwarf, and shine with infrared and visible-light colors. Our own sun will blossom into a planetary nebula when it dies in about five billion years. 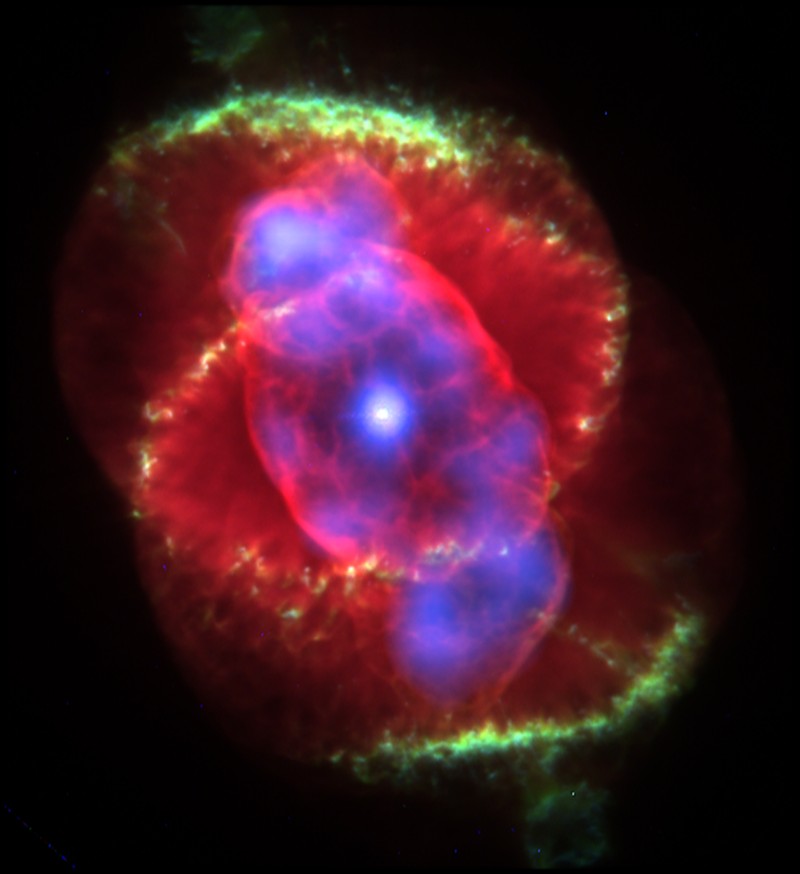 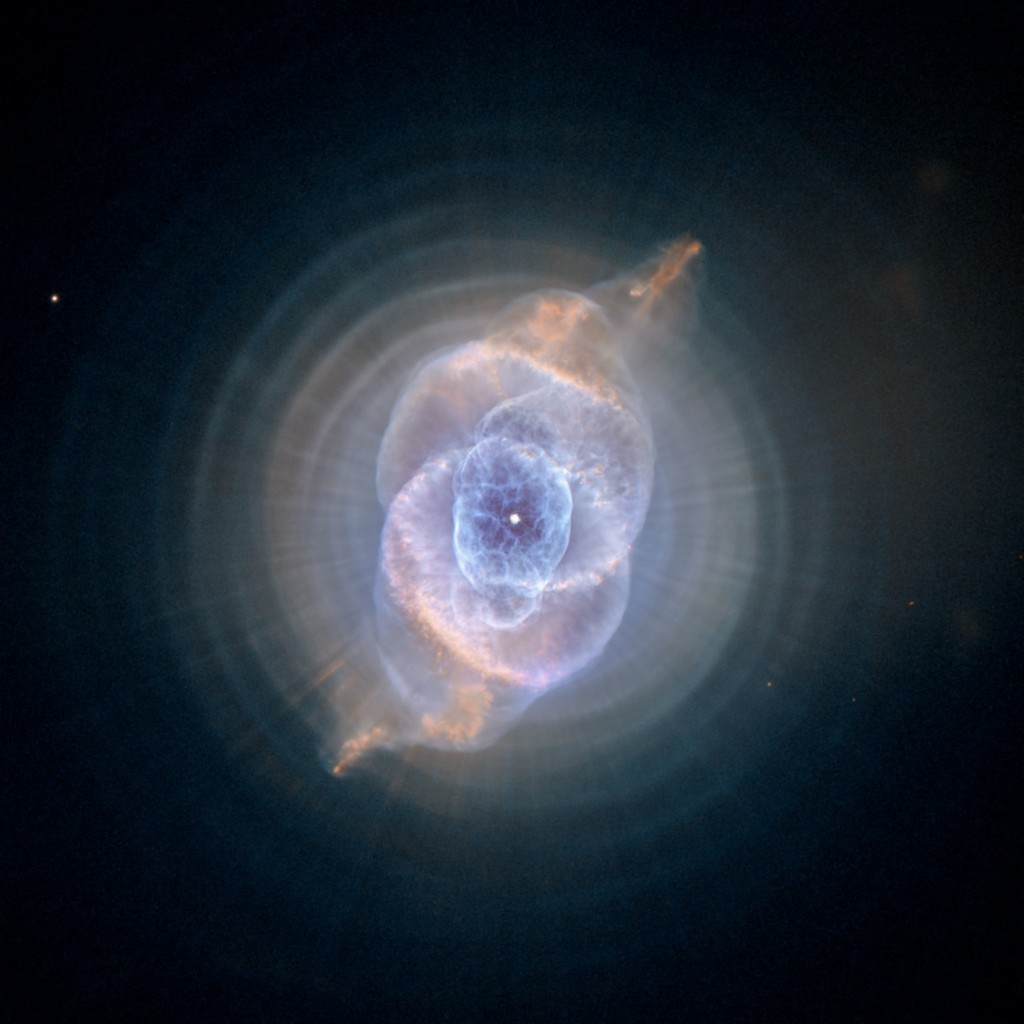 The Cat's Eye Nebula, processed to show its concentric rings from thermal shock, or so we think, sort of. 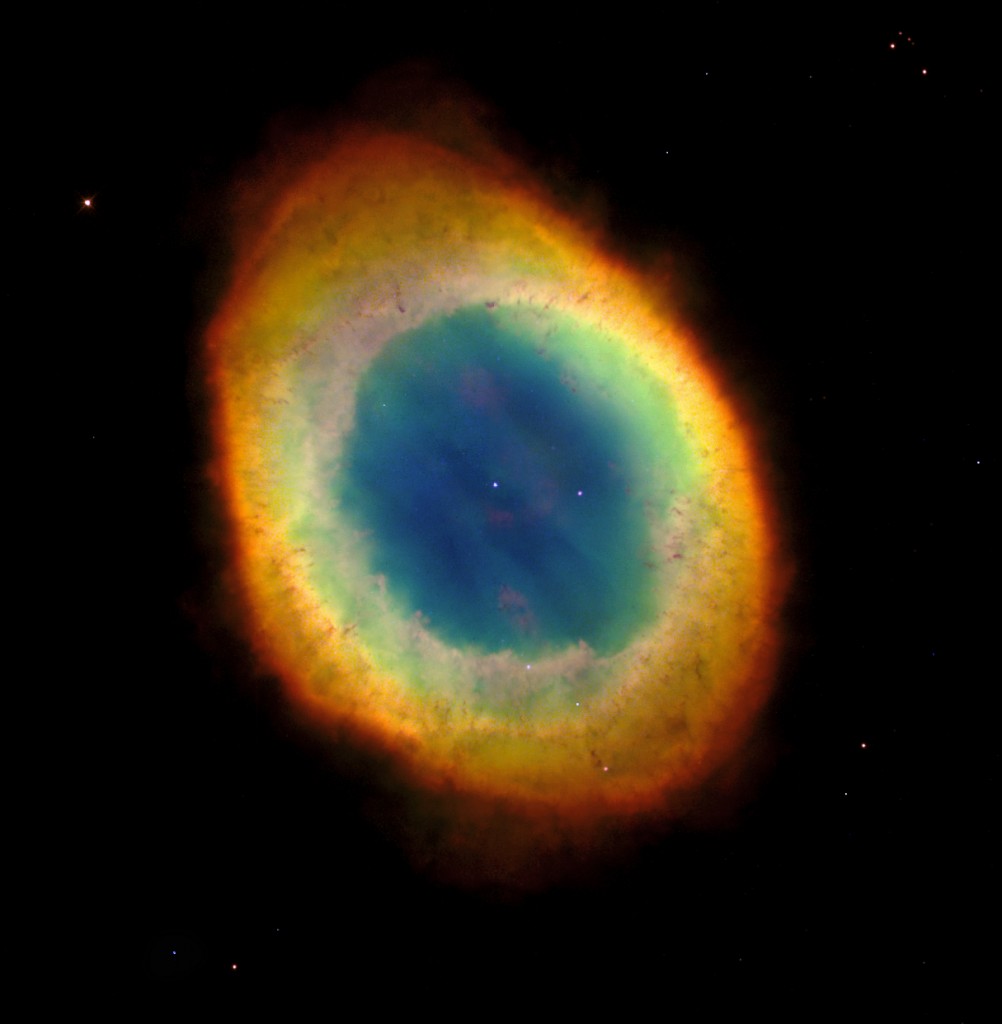 The Ring Nebula M57, located 2,300 light years from Earth, is another example of a planetary nebula.

This infrared image from NASA's Spitzer Space Telescope shows the Helix planetary nebula, located about 700 light-years away in the constellation Aquarius. Spitzer's infrared view of the Helix nebula, the eye looks more like that of a green monster's. Infrared light from the outer gaseous layers is represented in blues and greens. The white dwarf is visible as a tiny white dot in the center of the picture. The red color in the middle of the eye denotes the final layers of gas blown out when the star died. The brighter red circle in the very center is the glow of a dusty disk circling the white dwarf (the disk itself is too small to be resolved).

The Boomerang Nebula and the Egg Nebula are excellent and beautiful examples of this: stars are currently ejecting themselves as they form into things of the sort of the Cat’s Eye Nebula. These objects are dazzling and many times defy logic. 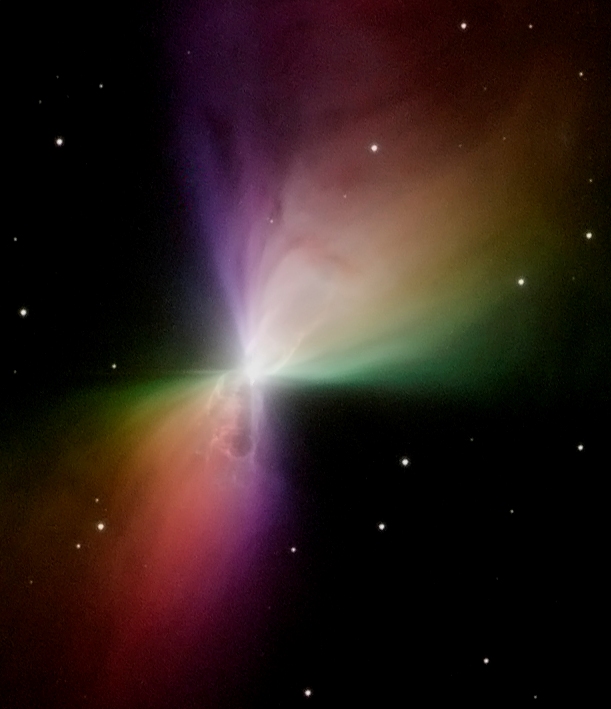 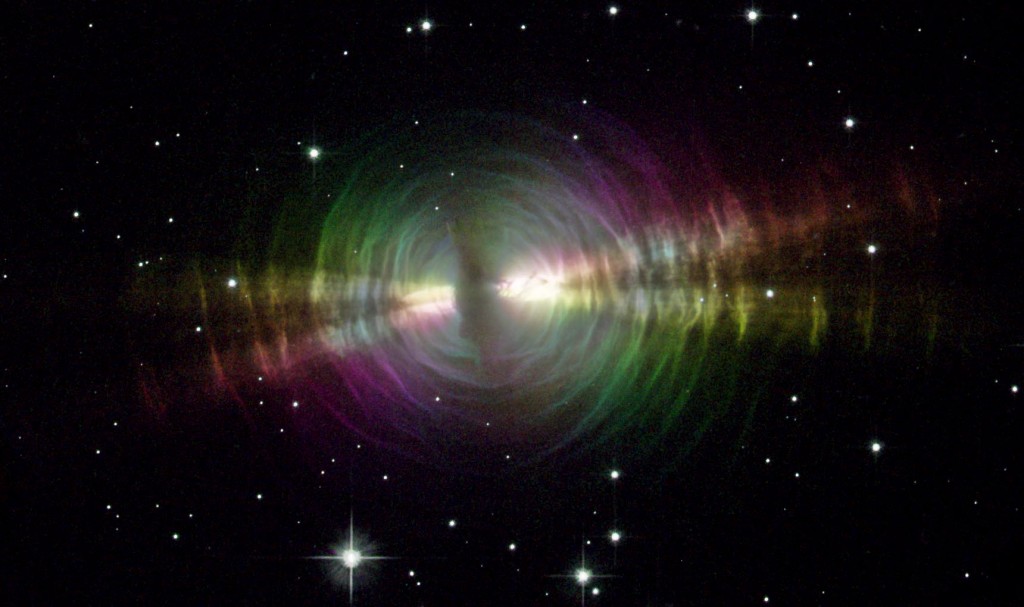 See? Even stars suffer from flatulence.

Earlier I mentioned that most astrophotography has to be enhanced in order to bring out the detail, structure, and mystery from many of these celestial bodies to light (pun intended). Here’s an example of an emission nebula, the Pelican Nebula (also known as the North America Nebula due to its shape). This is a very active nebula in both formation and star generation, so in a few million years it’ll look like something completely different. 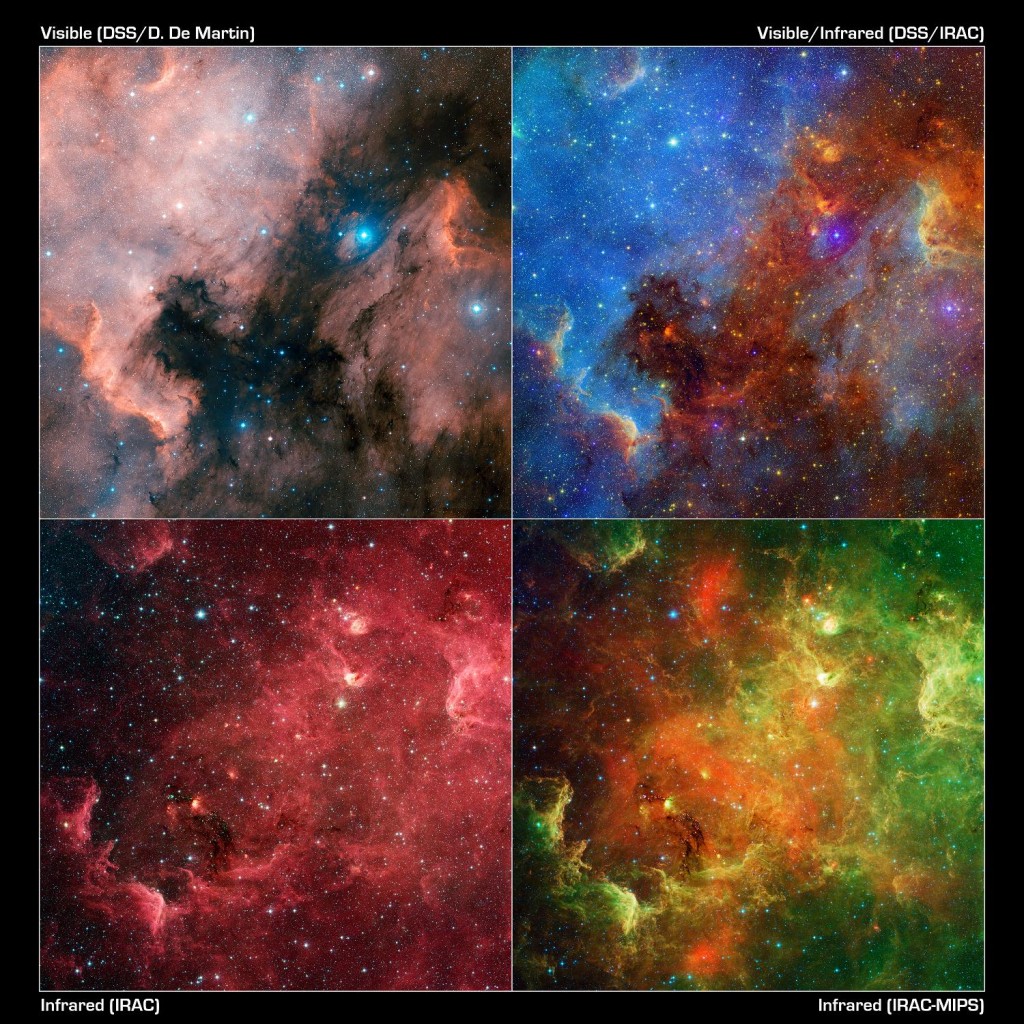 Depending on what portion of the light spectrum you look at, you see different features of the Pelican Nebula. Only the "visible" shows "true" color.Of particular notice is how visible light can't see many features infrared can - especially protostars.

And That’s Just a Tiny Fraction Of It

There are so many trillions upon trillions of galaxies, and each of them holding million of nebula, all unique, a true sight to behold. The telescope in my balcony can only see a few of these, for example, the Crab Nebula looks like a little swath of white light. I’d have to tether my camera to the eyepiece for an entire hour, while my telescope tracks the sky with specially built drive motors, in order to get an exposure that would bring out the detail in its structure.

Now that we have some of these supertelescopes in orbit we are able to witness the universe in a new light, free from atmospheric turbulence and interference from light pollution and our own sun and moon. The next generation of orbital telescopes are on their way to space right now, and we shall peer even deeper into the incredibly rich 15 billion year history that precedes us.